To:  The County Council of Montgomery County, Maryland

Implementing 5G is PURE INSANITY.  It requires yielding to two of the worst trends evident in our society today:  denial of science, which provides massive evidence of harm from radiofrequency radiation; and yielding to pressure from corporations that are willing to hurt the public, without compunction, for short-term profit.

Want to know why?  This message describes, as briefly as I can, the answers to the questions below.  Please read what interests you.  I present these comments as a retired U.S. Government career scientist (Ph.D. in Applied Physics, Harvard University).

Why is control of 5G secondary to stopping its deployment?

Control by local government of the deployment of 5G’s small cell towers is, indeed, an important goal, because local governments are closer to the people and can better reflect their wishes.

But there is an even more important goal:  STOPPING the deployment of 5G altogether.  The reason, as shown throughout this message, is that there is NO SAFE WAY to implement 5G in our communities; rather, there are only BAD WAYS and WORSE WAYS.  So local control means ONLY that local governments can choose among bad and worse ways.

It may seem difficult to stop 5G, but it will be easier to stop it NOW than to get it removed later after huge numbers of Maryland residents fall ill.

What makes Maryland a leader in MANDATING exposure to harmful radiofrequency radiation?

Maryland has rushed to implement multiple sources of radiofrequency radiation with little to no consideration of the adverse health effects.  Here are multiple examples:

Wireless Smart Meters for the measurement of electricity have already been forced on homes and businesses throughout much of Maryland.  These meters bring the source of radiofrequency radiation up close and personal to the residents, even to the walls against which children sleep.  Wireless Smart Meters transmit pulses of radiofrequency radiation throughout the day and the night, every day of the year.  To escape the radiation from your own meter, you must pay your electric power company a monthly Opt-Out fee, forever, for a non-radiating meter.  At last report, about 44,000 Maryland homeowners have made this choice.  But there is NO way to escape the radiation from your neighbors’ wireless meters.

Wi-Fi is implemented widely in Maryland’s schools and bathes the children and the teachers in radiofrequency radiation every school day for years.  Parents with the wisdom to protect their children from such exposure MUST forfeit a public school education for those children.  All this has occurred even though the Maryland Children’s Environmental Health and Protection Advisory Council, which reports to the Governor, recommended phasing Wi-Fi out of the schools in favor of much safer wired technology.  (Wifi Radiation in Schools in Maryland, Final Report, December 13, 2016, page 8.  (https://phpa.health.maryland.gov/OEHFP/EH/Shared%20Documents/CEHPAC/MD_CEHPAC_SchoolWiFi_022017_final.pdf)

Many Maryland public schools have even accepted the installation of cell towers on school grounds, in payment for fees, dramatically increasing the exposure of the children and the teachers to radiofrequency radiation.

This assault on the public health by radiofrequency radiation will be completed by installation of 5G’s small cell towers up and down residential and business streets, up close to Maryland residents.  These towers will operate 24 hours per day throughout the year.

What is Maryland’s implicit policy on exposure to radiofrequency radiation?

“No resident of Maryland shall be permitted to escape 24-hour exposure to radiofrequency radiation, at ever higher levels, even though such radiation has already been shown to be harmful to human health.”

“Wireless technology is good by definition, so the more of it the better, no matter what its effects on health may be.”

“All scientific evidence that shows that exposure to radiofrequency radiation is harmful to human health should be categorically denied, no matter what source that evidence comes from, including the National Institutes of Health, the International Agency for Research on Cancer of the World Health Organization, and the international biomedical research community more broadly.”

Why is human health so vulnerable to harm from radiofrequency radiation?

In the simplest terms, human beings are bioelectrical in nature.  That is why electrocardiograms work when they monitor a beating heart.  And that is why electroencephalograms work when they monitor the activities in the brain.  Humans evolved in levels of radiofrequency radiation far below those produced by human technology today.  We humans are simply not designed to tolerate today’s high levels of radiofrequency radiation.

When the radiofrequency radiation from cell towers, including 5G’s small cell towers, and other wireless sources, hits the body, that radiation disrupts the bioelectrical workings of the body.  This disruption occurs at levels of radiation far below the Maximum Permitted Exposure limits set by the Federal Communications Commission, which are the only “official” limits in place in the U.S.A. today.  In response, the body must fight back constantly to regain control.  This battle can lead to a wide range of health problems.  Here is just a partial list:  sleep disruption, headaches, irritability, ringing in the ears, fatigue, loss of concentration and memory, nerve pain, dizziness, eye problems, nausea, heart palpitations, depression, and cancer.

No one is immune to harm, but vulnerability varies widely with the individual.  That vulnerability appears to be greatest for pregnant mothers, young children, teenagers, men of reproductive age, seniors, the disabled, and those with chronic health conditions.  A host of major medical conditions are now under study by the international biomedical research community to determine what role exposure to radiofrequency radiation may play in causing, or aggravating, them.  Examples include autism, attention deficit hyperactivity disorder (ADHD), autoimmune diseases, and Alzheimer’s disease, among so many others.

The effects of radiofrequency radiation appear to be cumulative; so the longer that exposure continues, the greater the chance that an individual will be overtly affected.  Some individuals will develop a devastating condition called Electromagnetic Hypersensitivity Syndrome, with a host of symptoms, including extreme pain from exposure to even very low levels of radiofrequency radiation.  Just to survive, such individuals must often leave their homes and jobs, where exposure levels have proved to be too high, and move to rare locations away from radiation sources.  Such individuals regularly contact scientists (including me), physicians, and other aware individuals for advice on what to do.

What is the evidence of harm caused by radiofrequency radiation?

Thousands of archival biomedical research papers, published in peer-reviewed journals, have shown that radiofrequency radiation (“wireless radiation”) is harmful to human health, not to mention the health of other living entities.  These papers have been collected and reviewed in a number of major documents.  Here are three examples of such reviews:

In 2011, the International Agency for Research on Cancer of the World Health Organization classified radiofrequency radiation as a Group 2B Human Carcinogen (“possibly carcinogenic”), naming explicitly “wireless phone” radiation (cellular radiation), based on the increased risk for glioma.  Glioma is a malignant type of brain cancer that is usually fatal.  It most recently took the life of Senator John McCain and Beau Biden, the son of Vice President Joe Biden.  (https://www.iarc.fr/wp-content/uploads/2018/07/pr208_E.pdf)

In 2018, a massive study by the National Toxicology Program at the National Institutes of Health linked cellular radiofrequency radiation (RFR) to cancer of the nerves of the heart (schwannomas), to cancer of the brain (glioma), and to multiple other health effects in test animals.  (https://ntp.niehs.nih.gov/results/areas/cellphones/index.html)

In 2015 and continuing, 247 scientists from 42 nations signed an appeal to the United Nations.  These are scientists who have “published peer-reviewed papers on the biological or health effects of non-ionizing electromagnetic fields” (which are inclusive of radiofrequency radiation).  Their appeal was the following:

For more information on the health effects of radiofrequency radiation, please see the website of the Environmental Health Trust, especially the “Science” tab.  (https://ehtrust.org/)

What are the advantages and disadvantages of 5G compared to fiber-optic technology?

So users of wireless technology, including 5G, will have to decide if mobility ALONE is more important for their particular application than any other factor, including their own health and the health of their families, their friends, and their communities.

Compared to fiber-optic technology, 5G is already an out-dated technology, even aside from its adverse health effects.

What is driving the implementation of 5G?

5G appears to be an effort by the wireless industries to open new profit centers, now that they have largely maxed out the profits from today’s cell phone technology.  Consider these questions:

Is the RUSH to implement 5G more about staking out claims to small cell sites in right-of-ways than about providing services that customers really need?

Is the RUSH to implement 5G driven by the growing awareness of the public and its representatives that radiofrequency radiation is harmful to health, and thus the providers feel that they must act quickly before resistance builds further?

What scientific studies, from impartial sources, can the providers of 5G identify that prove that 5G has NO adverse health effects on humans?  The burden of proof is on the providers.

When questioned by U.S. Senator Richard Blumenthal in a hearing before the Senate Commerce, Science, and Transportation Committee (February, 7, 2019), the representatives of industry could name no existing Independent studies and none in progress that industry was supporting.  (Story:  https://www.blumenthal.senate.gov/newsroom/press/release/at-senate-commerce-hearing-blumenthal-raises-concerns-on-5g-wireless-technologys-potential-health-risks; Video:  https://www.youtube.com/watch?v=hsil3VQE5K4)

What should our telecommunications goals be?

Let me suggest the following:

Promote the expansion of fiber-optic technology as widely as possible, instead of degrading our environment with more harmful radiofrequency radiation, this time from 5G.

Require that the safety of 5G be proven by impartial studies before 5G can be installed in Maryland, instead of permitting the use of Maryland residents as guinea pigs to test that safety.

Join forces with other state and local governments to fight back against Federal laws and regulations that attempt to force any potentially harmful technology on the public without adequate PRIOR proof of safety.

Assert the legal right of the public to be free from the threat of assault by a wireless technology which every scientific indication to date suggests will be harmful to human health and sometimes fatal.

I am a retired U.S. Government career scientist (Ph.D. in Applied Physics from Harvard University).  During my Government career, I worked for the Executive Office of the President, the National Science Foundation, and the National Institute of Standards and Technology.  I currently interact with other scientists, with physicians, and with aware individuals worldwide about the impact of radiofrequency radiation on human health.

I have been a resident of Montgomery County since 1979. 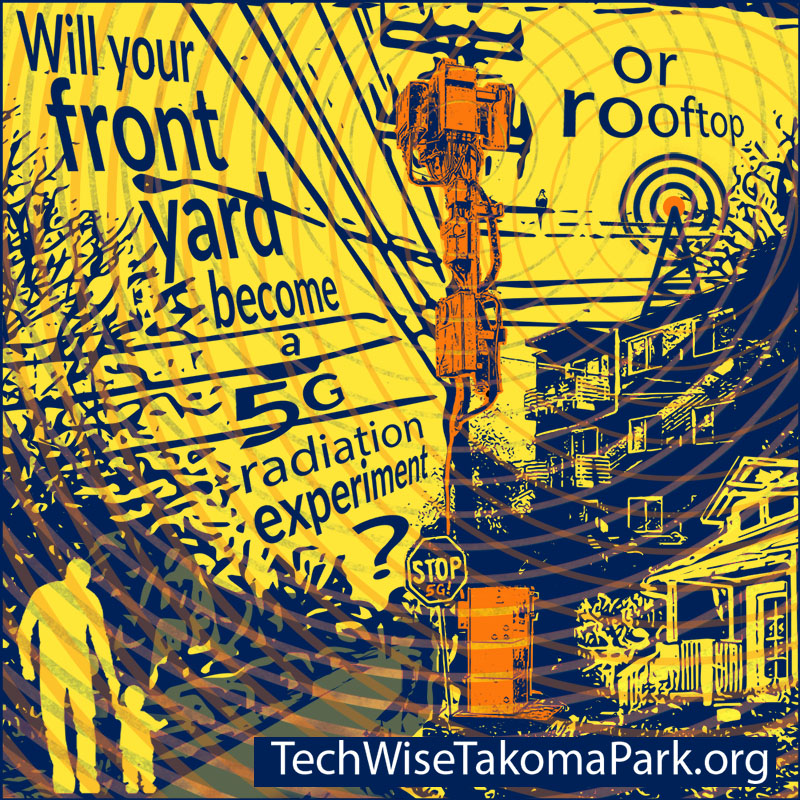